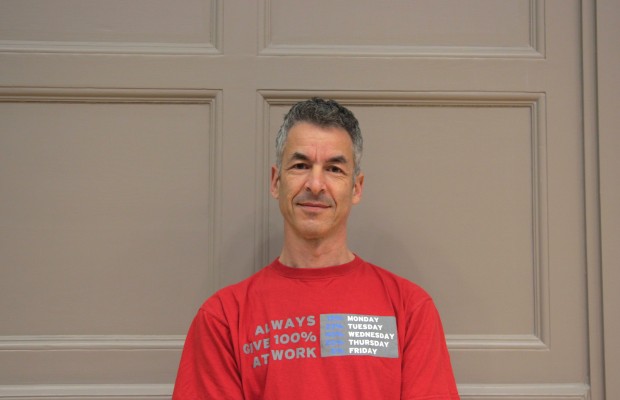 Myk Zeitlin attended Speakers’ Corner from 1977 to 1983, after seeing an advert in Peace News. His first impression was that Speakers’ Corner was “an offshoot of London zoo.” Myk’s model, aged 20, was Franz Kafka who worked in an insurance office by day and was a radical by night. He was inspired by Tony Allen’s anarchist critique of work to give up his “boring office job” in 1980 and become “full time” at Speakers’ Corner. He busked at Marble Arch and heckled a lot. Most of all Myk was interested in the social scene, which embraced intellectuals like Hungarian Alfred Reynolds. He thinks today’s orators are far more ideological and religious than in the 1970s. Myk recalls “Saint Paul” Hunt’s Sufi parable about a man picking up a strange looking stone, bearing the words “why do you seek more knowledge when you don’t put into practice what you already know.” Myk moved on partly because he wanted to put what he had learnt into practice.

“Probably the most important influence was Tony Allen. I guess he just fitted in with what I was thinking at the time. I was just starting off a lifetime career of sitting in an office and he was there with his critique of work as being pretty pointless and I kind of liked it. He wasn’t just talking about how crap capitalism was, he was actually talking about how he and others were trying to do things differently, trying to live a different life. And it was very different from the abstract theories which I’d been dealing with until then because I think when I started work I’d had this idea -my model was actually Franz Kafka. Franz Kafka, he worked in an insurance office in the day and then at night he did something a lot more interesting and he was a bit radical. So I thought that was going to be my life. Meeting Tony Allen made me realise, eventually, over a few years, that it just wasn’t on. That I had to do something different.”

“I guess I tended to like hecklers because I was always a bit dubious about people standing there speaking, telling us what they think from a position slightly above us. And so if someone’s responding it actually can be empowering to everyone else. You know, it can make them think, ‘Oh actually, yes, I can say something as well. I can disagree.’”