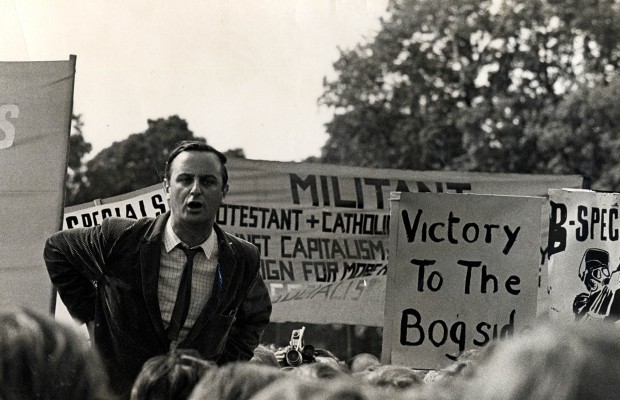 John Palmer, retired journalist, was born in England and brought up in Ireland. He found Speakers’ Corner to be “an intensely political forum” and an “education in left wing ideas,” some of which were emerging in response to the crumbling of Stalinism. He first spoke in the late 1950s for the Irish National Union against the policy of internment without trial in Northern Ireland. He also spoke against the war in Vietnam platforms and on International Socialist demonstrations ending in Hyde Park. John Palmer heard political luminaries like Gerry Healy (co-founder of the Fourth International), CLR James, and the anarchists Albert Meltzer and Guy Aldred at Speakers’ Corner. What he found most extraordinary were the debates between “ordinary folk,” the working class autodidacts in the crowd, which continued long after the speakers had left. He describes how the free entertainment provided by powerful orators in austere post-war Britain, was replaced by the “conversational tone” of radio and television.

“I was struck by the number of ordinary, so-called ordinary people, who used to take part, who were very knowledgeable, about all kinds of things. I mean just to give you one vignette, or one particular occasion, I remember, I remember there was a discussion about Marx going on between two - I wasn't involved - between different people and a Welshman was there and he was a miner from South Wales who had come up. And he said, intervening on the debate, he said, in his pit some of the miners had taught themselves German in order to read Marx's Grundrisse. It was only available in German, not in English. And, I mean I thought that was extraordinary. It was part of the workers' education movement; it was part of the current at the time and, as I say, society's changed hugely. That kind of working-class intellectual, autodidact, was more common then than perhaps it is now.”

“I thought it was an interesting period, just that period, to the height of the Cold War, when Stalinism was beginning to crack, and different kinds of left wing ideas were beginning to emerge. They were reflected to some extent at Speakers' Corner. It was a kind of political education, opening up to ideas that I hadn't encountered before, of the Marxist left, Trotskyist, anarchist, the ILP (Independent Labour Party) used to be there, the Socialist Party of Great Britain, Donald Soper, although he was a Methodist, also really had a political platform, he used to get very large crowds, and there were one or two other religious groups. But the most interesting thing to me were the political discussions that the speakers attracted, and after the speakers had left, often you'd get a crowd of 50, 60, 80 people, debating political issues, intense arguments and polemics and I was very much fascinated with that process.”