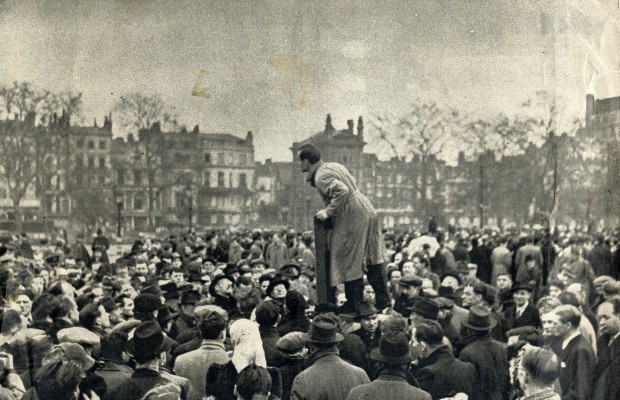 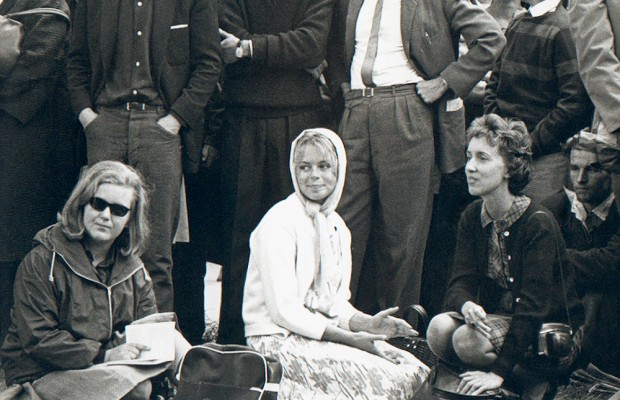 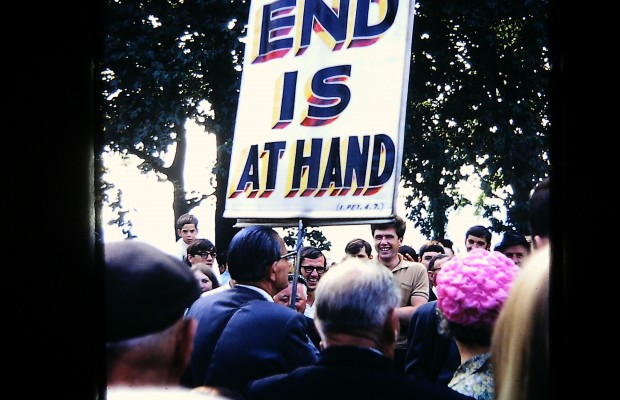 Holy Bob carried a banner proclaiming “The End Is At Hand,”, 1968 © Chris Kennett 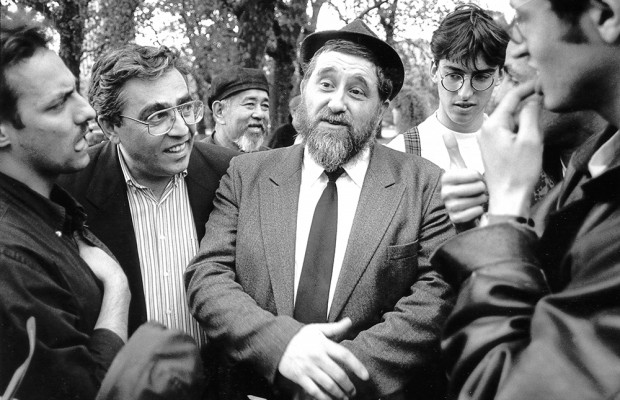 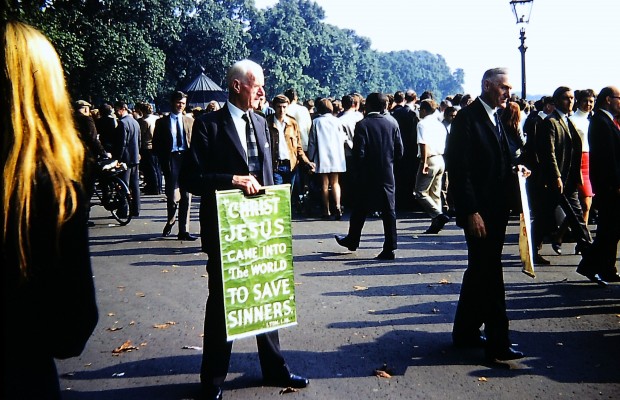 The pavilion (background) is the site of the café run by Rita and Rose, 1968 © Chris Kennett 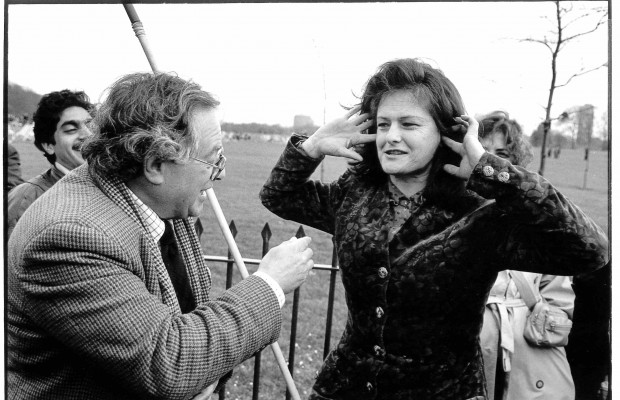 Wife of Peter Bhalla, a communist speaker, argues with a man, 1993 © Philip Wolmuth

Less conspicuous than the speakers, less noisy than the hecklers, yet just as vital, the faithful regulars of Speakers’ Corner mix with tourists to create an international audience. In the past, the crowd was a refuge for individuals “whose lives had been disturbed and disorientated” by the Second World War and those fleeing the drudgery of working class Britain for a few short hours. “Betty the Quiz Queen” who doled out jelly babies in exchange for answers and “Holy Bob the Banner Man” required a call and response exchange with the crowd, who were never passive. People claim the most intelligent exchanges happen on the fringes or permeable borders between meetings, where regulars gossip trade jokes and commentate on form. Keeping the mythology of Speakers’ Corner alive through story telling is as vital as the oratory itself.

Audio clips about the crowd

“It was exciting having all these people milling around and listening and talking and arguing, debating. It wasn’t just listening. They were stimulated by the ideas. You got that feeling that the ideas were exciting. The debates were also amusing. I’m sure the other people learnt as I learnt. It widened what I already knew, and it probably did for them too.”

John Palmer (speaker and debater from 1957)

“I was struck by the number of ordinary, so-called ordinary people, who used to take part, who were very knowledgeable, about all kinds of things. I mean just to give you one vignette, or one particular occasion, I remember, I remember there was a discussion about Marx going on between two - I wasn't involved - between different people and a Welshman was there and he was a miner from South Wales who had come up. And he said, intervening on the debate, he said, in his pit some of the miners had taught themselves German in order to read Marx's Grundrisse. It was only available in German, not in English. And, I mean I thought that was extraordinary. It was part of the workers' education movement; it was part of the current at the time and, as I say, society's changed hugely. That kind of working-class intellectual, autodidact, was more common then than perhaps it is now.”

“There was the banner man, I called him Geordie, his real name was Bob, or Holy Bob, and he held up this placard and it read, ‘The End is at Hand.’ And on the back it said, ‘Flee from the wroth to come.’ And he was surrounded by a group of singers and I thought, ‘Well, is this supposed to be a religious meeting?’ Because they all seemed to be making funny noises, and Geordie, or Bob his name was, he didn't have much to say, he just kept saying to people, ‘Well,’ you know, ‘Does anyone here want to go to heaven? Does anyone here want to go to heaven?’ And somebody in the crowd would shout out, ‘Yeah, what time's the next train?’ And, I mean, I just wasn't used to this you see because for me I thought, well this should be religious speakers and entertainers but this seemed to be- this seemed to be a mixture of both. And he would burst into song spontaneously, there'd be these pseudo religious songs, you couldn't really call them hymns, but he started singing, ‘Whiter than snow, yes whiter than snow, wash me and I will be whiter than snow.’ And then the crowd would all start joining in, you know, they had their own sort of version of these songs so they'd start off like, [sings] ‘Whiter than the white wash on the wall, whiter than the white wash on the wall, wash me in the water where you wash your dirty daughter and I will be whiter than the white wash on the wall.’ And isn't it strange, I can remember it word for word to this day, so it really made an impression on me.”

“It has the reputation as being the largest open air lunatic asylum in the world, and that’s a big claim. But, it did facilitate people whose lives perhaps had been disturbed and disorientated by the war. And all the time at Speakers’ Corner that I knew it those early days and until quite recently, there was a underbelly of people who went to Speakers’ Corner like I do because it’s there. And, it was a place where they could meet other people and talk and have a coffee and a sandwich from the little old tea parlour, which is still there to this day although now run as a franchise. People signified a lot in those days because you saw them there regularly. They became well known to you and two of the people who, I suppose each in their own way deserve a medal, were the two women who ran the tea parlour in those days. It does seem a long time ago in a way. One was called Rita and the other was called Rose. And Rita was an Irish women. Rose was of West Indian origin. And they probably saved quite a few lives because amongst these people, the soft underbelly as it were, were a lot of people who were homeless, who had mental health problems, and some people were starving and a sandwich or two given out at the end of the day and a cup of tea or coffee for nothing probably saved a few lives.”

“The fact that I'm going there regularly, obviously shows that I benefit from it. It must be. And, listening to conversations, joining them, starting conversations with complete strangers is fascinating. I'm an atheist so when I'm in a religious meeting, then, ‘Oh, you atheists, you're terrible.’ So a standard question is, ‘Aren't you worried what happens when you die?’ No, no, no, no, no. When I die, and I go up to heaven and reach the pearly gates, and see that there actually is a heaven, and St Peter will block me, I would ask St Peter, ‘Just speak with the boss, or his deputy, Jesus Christ, and tell him Reinhard is at the gates. He always tried to be a good person, but he didn't find the evidence that you exist. I see I’m wrong, but God won't mind. God is all-forgiving, so I have no problems with the idea of being wrong.’ Such conversations you can have.”

Marko Stepanov (artist and occasional speaker from former Yugoslavia, since 1986)

“And also there was another institution. After the park what happened sort of about eight ‘o clock the darkness fall and everybody’s exhausted. So all these people who argued tooth and nail against each other gather in a chicken shed, which was a Kentucky place and the management hated that. Imagine one hundred lunatics come in and destroy the business, they all have their own water or order a tea and then hang about for three hours with a tea, not good for business. So we all go from the park to chicken shed or to McDonalds also in Marble Arch and then just read the newspapers and chat like extended family like. I’m not a pub person but I guess people go to local pub and meet there, you know, socially. So in the park you hate each other and then go to McDonald’s - you might not even chat to each other, it doesn’t matter because it’s quite large group - and then sit there switching from the subject of the discussion in the park to normal issues, rent or illnesses or health, whatever.”