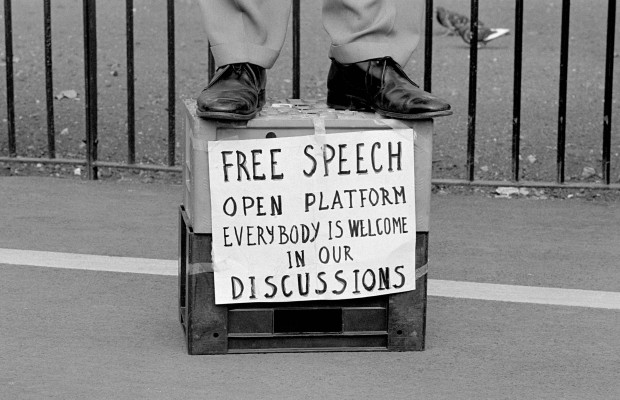 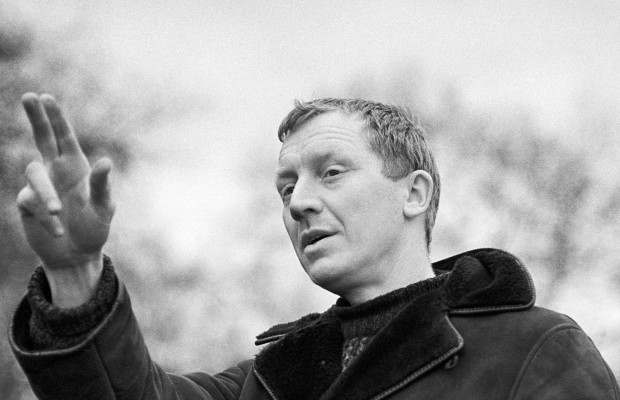 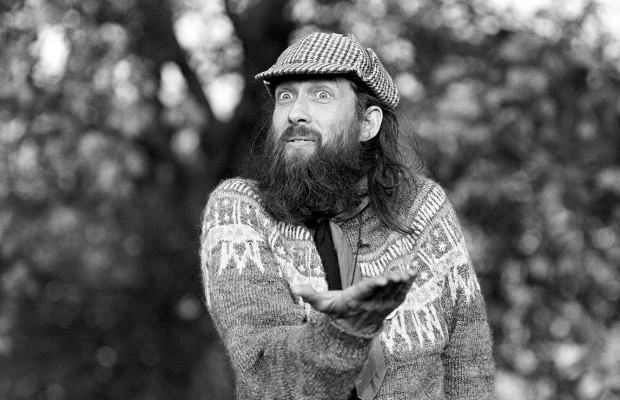 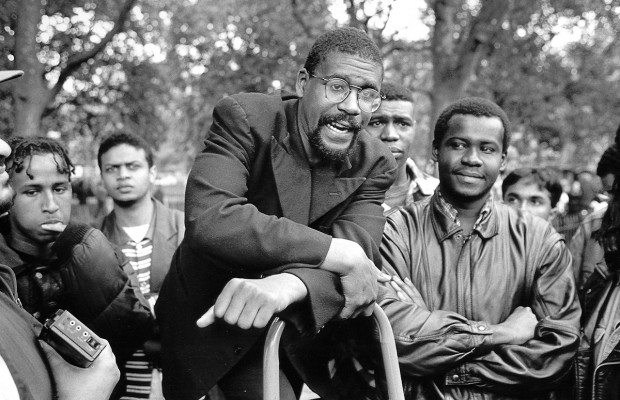 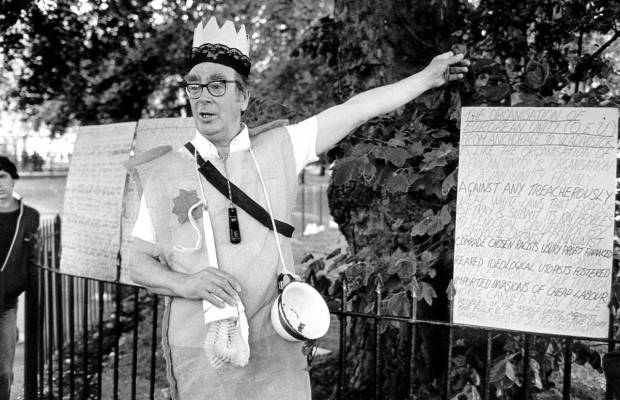 Frank and his “royal regalia.” He was an anti-royalist, 1980 © Philip Wolmuth 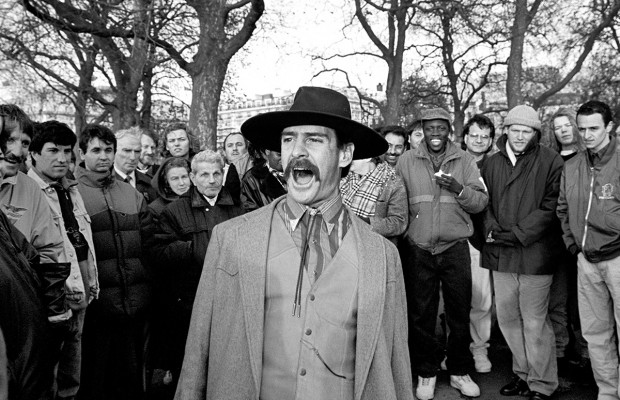 The speakers declaim to crowds of hundreds or talk intently with small groups. They are mostly, but not only, men, with firm ideas about their territory. Stepladders, milk crates, or beautifully crafted wooden boxes raise them up. “Fisherman’s Friends” and oranges soothe their throats. Some have a serious message; others set out to entertain, but every orator needs jokes or controversy to draw a crowd into their orbit. Many embellish their platforms with banners and placards, ranging from the self-deprecating: “Tony Allen; advocate heckler, anarchist parasite, mixed ability shaman,” to the sincere: “Heavenly flight paths, Christ’s embassy.”

Audio clips about the speakers

“I guess it’s the same sort of thing athletes do, they have a little sort of, almost a ritual you go through. And I guess it’s like, you know, there is a place I would park the car. There was a particular route I would take, it’s not in a superstitious way. I’m going to Speakers’ Corner, seeing the chaos, that’s when it’s like, ‘Oh!’ My stomach’s starting to get, you know, like, butterflies, exactly like they call it, they call it, flight or fight response. But forget the fight, it was like, ‘I wanna run’ yeah. And I mean I don’t get nervous speaking now except if I went down to Speakers’ Corner I would still be nervous. I mean, even, I’m saying it I’m feeling scared. Right now, as I’m talking about it, I’m feeling that feeling right now.”

“You can’t come with a script”

“You can speak about any subject, it doesn't matter what the subject is, if you have a style of speaking or you have a patter that's engaging. And to some degree connects with the times, you can't just come with a script and assume it's gonna work, 'cause it won't. That script has to be played against the audience at Speakers’ Corner. But if you're prepared to work it, and play the audience with that script you can create a speech about anything, could be aliens, could be you know, philosophy, politics, history, sexism, racism, you name it. Anything you want to talk about, you can talk about.”

“It was always there. And it was having the opportunity to develop an idea that was different. I saw myself as an enabler, because although I used to start off with something topical, the whole idea was to enable others, even those who were reluctant, especially those who were reluctant. People were quite nervous. Again, it’s a question of giving people a voice, of allowing their light to shine, their inner self to shine on something that they felt passionate about. I used to start off by saying ‘this is the Open Platform, and I’m probably one of the most boring speakers in the park. So if you think you can do better, come and have a go.’ And it was sort of self-effacing, but in a sort of a caring way, to encourage other people. Because I used to say, ‘If I could do it, so can you.’”

“Speakers’ Corner was a good idea, was a good example of how you can articulate your cause, people listen. But you have to have something to say. Not only do you have to have something to say you have to be humorous to keep your audience because no one will stand there for three hours and listen to anybody, you know, not even me. So you had to find some humour within the speeches you were making. I mean, I’ll never forgot one day somebody said to me, ‘Oh why don’t you go home? You know, you came on the banana boat why don’t you go back on the banana boat’ and I said to him, ‘Look my brother, I didn’t come on the banana boat I go home by British Airways and when I was in my country I saw British Airways and it says B O A C. To me I meant British Overseas Asian Carriers I saw it and so I came.’”

“‘Anti dependent’ which is a favourite phrase of mine. He defines himself by what he’s against, which a lot of people do that, especially at Speakers' Corner. Well there’s dependence, which we understand what dependence means, you can’t live without something else. And then there’s independence, which is a state of grace we all aspire to, and there’s anti dependence which a lot of anarchists think is independence but it actually isn’t, they’re defining themselves by what they’re against. They’re against the police and the state and the corporate yadda yadda yadda. And that’s why I turned my nose up when you started talking about racism, ’cause so many people define themselves by being against the fascists and against the racists and there’s a lot more going on than just that.”

“Google doesn’t have the answers"

“And, just to make that speech, just to ask like what the hell is going on like, you know. This is where I am in my life, you know, I’m worked to the bone, I’m tired all the time, you know, yet I’m living in one of the most developed prosperous nations in the world. I should be happy by all accounts but I’m not so I’m asking these questions and Speakers’ Corner is a enormously liberating tool in that regard. That you have that option, you have the option to go down and just say ‘I don’t know what’s going on does anyone else know,’ ‘cause Google doesn’t have an answer. If I type that into Google I’ll get some health farm that’s charging me fifteen grand or I’ll get some spititual guru who’ll fly me half way across the world and have jumping over burning flames and all- you know. Just go down at grass roots, ask people who are predominantly in the same position as yourself, ask them what their take on it and you know what, they answer the question, and I developed you know. I got the answer, you know, I’m glad to say so. I have gratitude for it existing as a model.”