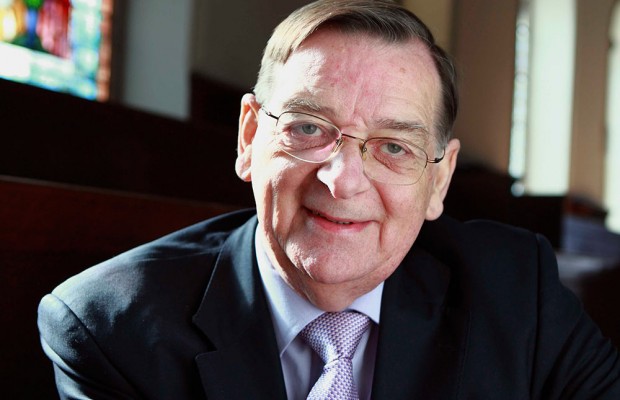 Leslie Griffiths spent the first ten years of his career as a Methodist minister in Haiti, returning to London in 1980. In the mid-1980s he became superintendent of the West London Mission where he met Donald Soper who was still very active, despite officially having retired. Leslie first went to Speakers’ Corner under the joking pretext that if Donald was “guilty of any heresy,” the superintendent should know about it. Leslie experienced Speakers’ Corner as a “marketplace for ideas” and he occasionally “stood in” for the big man on his platform. He saw open air oratory as an opportunity to communicate with as wide an audience as possible. He took Donald’s advice: “When you’re up there on the stand, look as if you’re enjoying it, because if you don’t, the British public will let you suffer on your own.” Leslie enjoyed “the cut and thrust” of Speakers’ Corner and wishes that church congregations would interject with questions or constructive heckles.

“I mean if you read the Act of Apostles, Chapter 17, and you read St. Paul going to Athens where every conceivable school of thought had put out its stall and was trying to get people interested, whether they were Stoics or Sceptics or Heracliteans or Epicureans or whatever they were, you know, it just felt like that, it felt like a marketplace for ideas. And just as you’d go to a marketplace and turn things over and see if you like them or not, so you could move around from one place to another, and that was one of the features of it.”

"Run through the street"

“Too many of my colleagues, I feel, content themselves with speaking within the boundaries of the church and then become, kind of rather predictable and they’re speaking to the converted all the time. And like Donald, I thought that one’s task was as much to communicate what one believed in to as wide an audience as possible, so wherever I’ve been I’ve looked for the wider audience.....It’s an eye opener for some people to realise that the Christian message doesn’t belong to the church in an exclusive way, it’s actually something that’s intended to run through the streets”