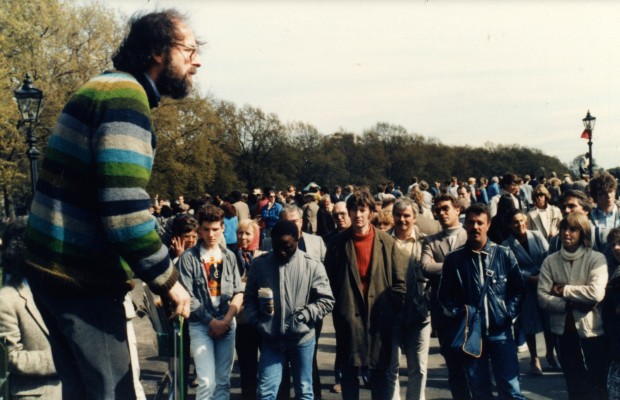 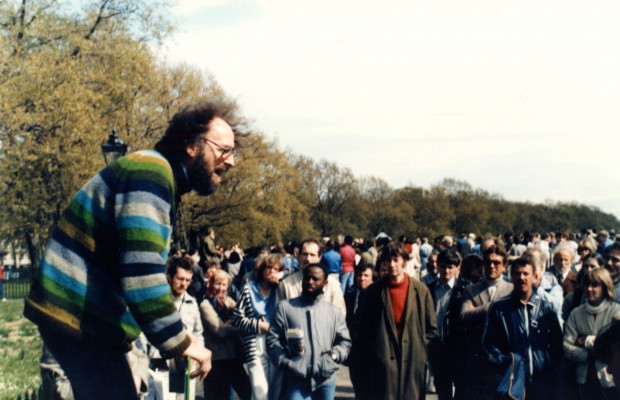 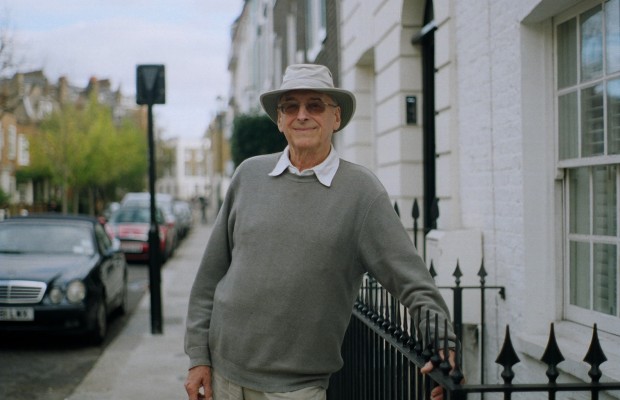 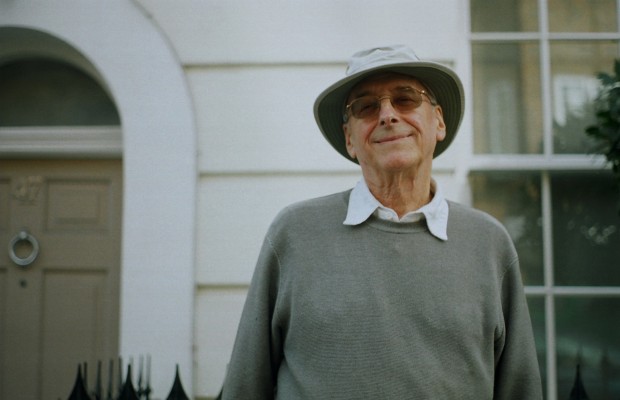 Richard Headicar visited Speakers’ Corner as a young man in the 1950s. Now an atheist, he was inspired at an early age by the oratorical flair of three Methodists: Donald Soper, Leslie Weatherhead and William Sangster. His first platform was the light hearted “People’s Retrogressive Party,” but he became serious about nuclear disarmament after hearing Donald Soper talk about the gratuitousness of bombing Hiroshima and conducting his own independent research. Richard joined the Committee of 100, was arrested for his anti-nuclear campaigning and served a sentence in prison. Bertrand Russell and Vanessa Redgrave spoke on his platform at this time. He earned a reputation for patience, accuracy and welcoming questions. He says: “You have to be able to listen for at least double that time to what other people have to say, or you have nothing to say yourself.” Richard’s subject matter later broadened after meeting the radical Hungarian philosopher and poet Alfred Reynolds. Reynolds was a Speakers’ Corner regular who had rebelled against the Soviet regime and developed denazification techniques in Germany and Norway. Richard became Alfred’s biographer. Richard is also a longstanding member of the Socialist Party of Great Britain (SPGB).

“I was a jailbird”

“I had had a platform in the park called the People’s Retrogressive Party. ‘Advance to yesterday, look backwards to the future and anticipate the past.’ And when people asked for my policy I told them it was to recreate the past by travelling backwards into the future. They never understood that! So that was a fun thing. And then I became serious about the bomb and saw the implications of it, and joined the CND but had my own independent platform. I joined the Committee of 100 and got arrested and was sent to jail. And that was another great learning experience for me. And then I always delight in telling people I was a jailbird and I came out and carried on with my activities. In that time I was quite high focus, my home was raided by the Special Branch, looking for allegedly plans to throw stones at Queen Frederica, which I wasn’t interested in the slightest. But what they did miss, which I had under my trilby hat on a hook was the first divulged plans of the regional seats of government, which nobody knew about, I’ve still got a copy somewhere. And 50 of them came to my home mysteriously, and because they knew I’d use them.”

“Strangely enough, one of the talks I subsequently gave in the Socialist Party, which was quite an unusual talk in the political sphere, was the rationality of love, because I learnt that from Alfred and that’s one of the great things of my life. There is no separation between the practical and emotional. We know now from our knowledge of the brain that one informs the other all the time. You cannot make an entirely emotional decision. You seldom make, if ever, an entirely practical decision. And for me love came to mean something that the more I thought about, the more I applied my mind to, the more passionate and fulfilling it would become because I’d learn how to do it better and about the little things in life. And it’s those little things that I saw in the end after all my dramatic appearances on the public stage that really mattered. The little bits of caring, the tiniest perceptions about what a friend may need. And the little ordinary, everyday pleasantries and niceties of life, these can be far better and sometimes far beyond words.”