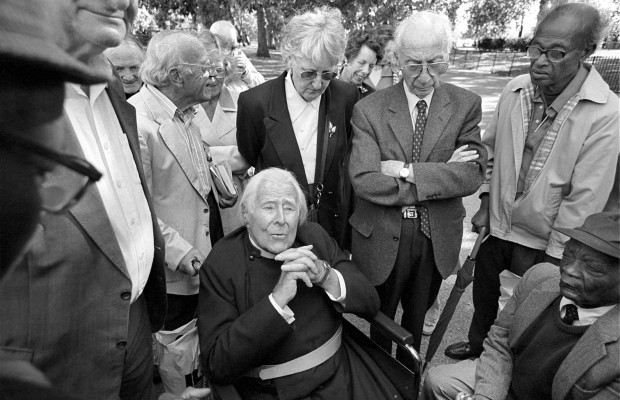 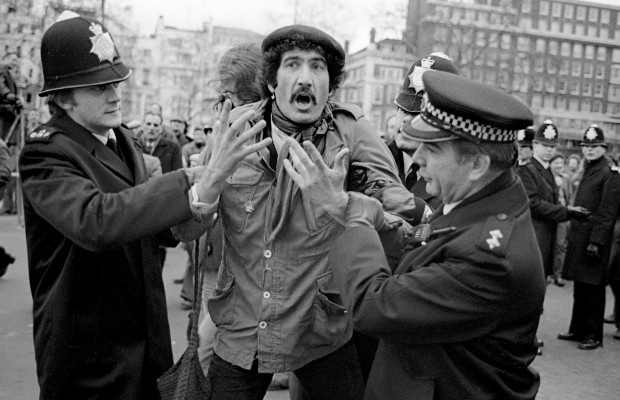 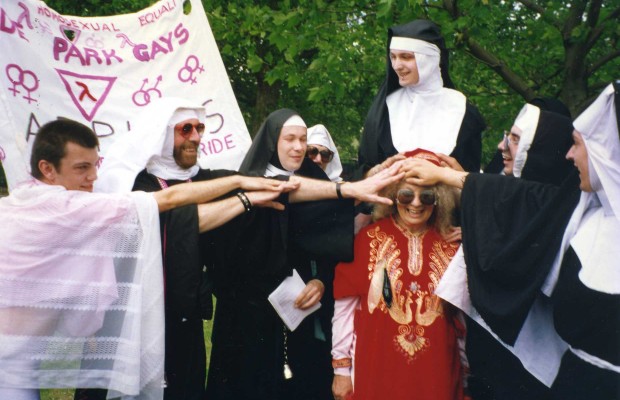 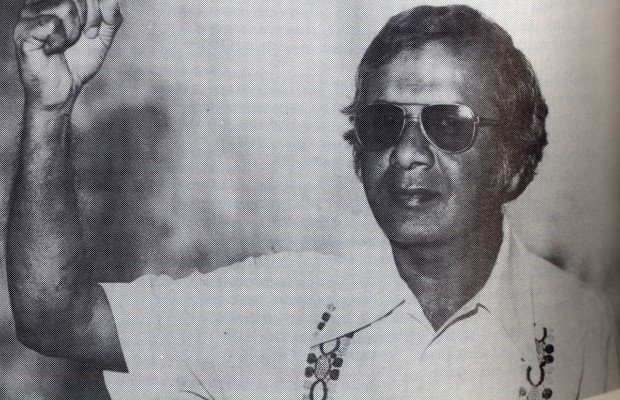 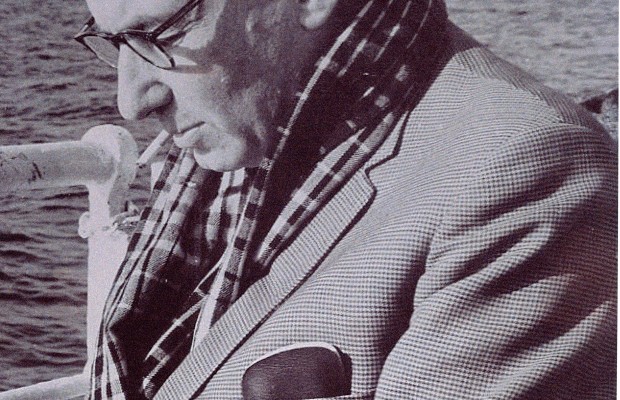 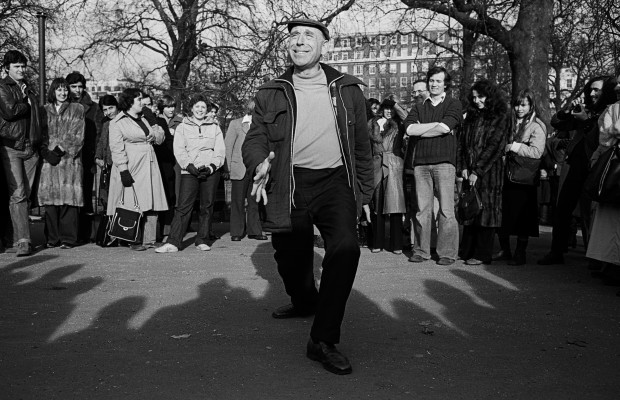 Speakers’ Corner owes its magnetism, in part, to its “variety show” atmosphere; it is possible to encounter all human life and then walk away. Regulars also form lasting bonds with a significant person, usually a mentor or somebody who reveals another mode of life.

“I had never been a pacifist. I worked in Woolwich Arsenal for ten years and waved the flag and was very patriotic, but listening to old Soper he could be very very convincing and persuasive. My sister and I did become pacifists. You see, we weren’t intellectual people. I suppose we were ripe to be influenced. I don’t know if I’m very easily influenced, I don’t think anybody would ever make me a Tory [laughs], but, you know, we were very ordinary people. But then you see to a certain extent, Soper appealed to ordinary people because the one thing that struck me, I’d forgotten this, on Tower Hill he was the only minister I’d ever heard who spoke ordinary language not, erm, theological or ecclesiastical. He could speak to ordinary working people. There were the dockers, and the businessmen, he spoke an ordinary language.”

“Probably the most important influence was Tony Allen . I guess he just fitted in with what I was thinking at the time. I was just starting off a lifetime career of sitting in an office and he was there with his critique of work as being pretty pointless and I kind of liked it. He wasn’t just talking about how crap capitalism was, he was actually talking about how he and others were trying to do things differently, trying to live a different life. And it was very different from the abstract theories which I’d been dealing with until then because I think when I started work I’d had this idea -my model was actually Franz Kafka. Franz Kafka, he worked in an insurance office in the day and then at night he did something a lot more interesting and he was a bit radical. So I thought that was going to be my life. Meeting Tony Allen made me realise, eventually, over a few years, that it just wasn’t on. That I had to do something different.”

“I think in a way Speakers’ Corner saved my life, it gave me different points of view... Working class Britain isn’t very exciting especially at my time of life. It was to me intellectually dead. Marx is okay with a pinch of salt and being brothers or sisters or comrades has its attraction, it’s a form of religion then. But Speakers’ Corner in a way was utopia because you had real nutcases. I’m a free thinker and there were others who talked about banning the bomb and any political issue. It was Ogilvie, it was Axel it was. There were a few like that. I mean there was Webster who came over from Australia because he used to be National Front and then gave it up and wanted to come to London to apologise to London that he’d ever been a National Front and then went back to Australia. So people from all over the world got up on some elevation and they used milk crates and stuff like that. So they had this need to express something and for me, even as a spectator a) you got to know a lot of other people and b) it released something which was … crushing.”

“A lot of black people used Speakers’ Corner, d’ you know what I mean. It was a political space it was a space to talk and Roy dominated that space. Roy had made that tape From Where I Stand and one day me, my sister and her boyfriend, I can’t even remember where we were coming from, but her boyfriend had the tape, and stuck it in the car. So we’re in the car in stitches, absolute stitches creasing up as though we’re listening to any Chris Rock or any sort of contemporary comedian d’ you know what I mean. And also being educated at the same time not just being educated but also empowered because here’s Roy Saw telling white people where it’s at, talking about the American Empire. D’ you know what I mean, and so we felt empowered as black people d’ you hear what I’m saying because Roy Sawh spoke up d’ you know what I mean! You know and you can hear him cursing out white people.”

“Strangely enough, one of the talks I subsequently gave in the Socialist Party, which was quite an unusual talk in the political sphere, was the rationality of love, because I learnt that from Alfred and that’s one of the great things of my life. There is no separation between the practical and emotional. We know now from our knowledge of the brain that one informs the other all the time. You cannot make an entirely emotional decision. You seldom make, if ever, an entirely practical decision. And for me love came to mean something that the more I thought about, the more I applied my mind to, the more passionate and fulfilling it would become because I’d learn how to do it better and about the little things in life. And it’s those little things that I saw in the end after all my dramatic appearances on the public stage that really mattered. The little bits of caring, the tiniest perceptions about what a friend may need. And the little ordinary, everyday pleasantries and niceties of life, these can be far better and sometimes far beyond words.”

Bob Rogers (Bob was friends with Norman Schlund, a great entertainer who slept on the night buses)

“There was a time when I had certain problems, personal problems and it was a great relief to be able to escape from the conventional world and take my place in the world of the users of the night bus services. Because a lot of people who were homeless used the night buses. And Norman was somebody whose appearance would bely his homelessness and I must emphasise this, you wouldn’t realize that he was a homeless person. So Norman would plan his nights, and so for example, when I joined him we might leave the Victory Services Club round about midnight, we would saunter out into the street and we would get a night bus which would take us to Trafalgar Square. And we would get another night bus which would take us, let us say, to Uxbridge. It would be about two o’clock, two thirty in the morning, and, we would then go for a walk. We would walk for half an hour in one direction and we would come back half an hour in the other direction. We would get another night bus from Uxbridge bus station which would return us to Trafalgar Square and we then might either walk or take another night bus to Smithfield meat market. This again was at a time when Smithfield meat market was much, much busier and active than it is today. And there we would regale ourselves, not in one of the smart pubs or bars which exists today for today for the office workers, but in a much more down to earth greasy spoon type establishment, probably ran by a couple of Italian brothers let us say, or family, where you would have a wad, slice of bread and, a mug of tea.”