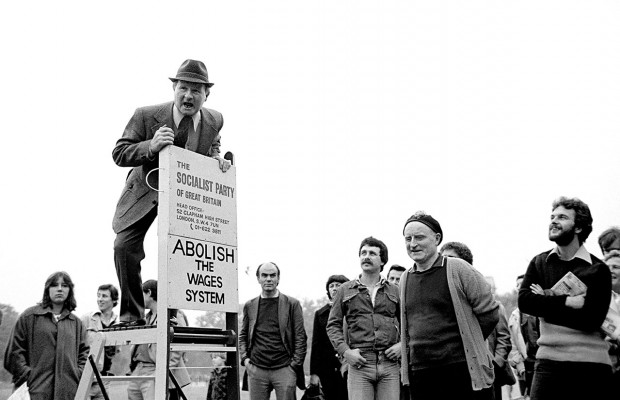 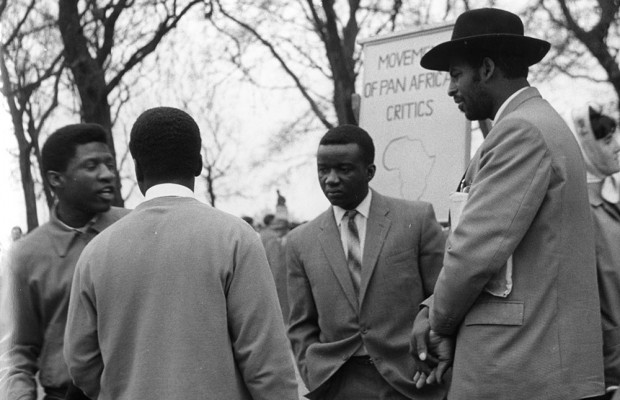 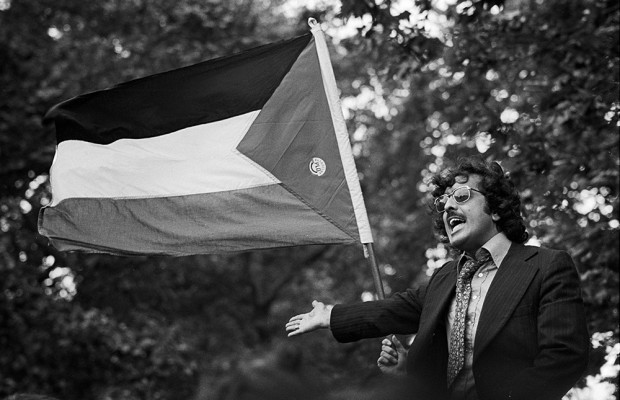 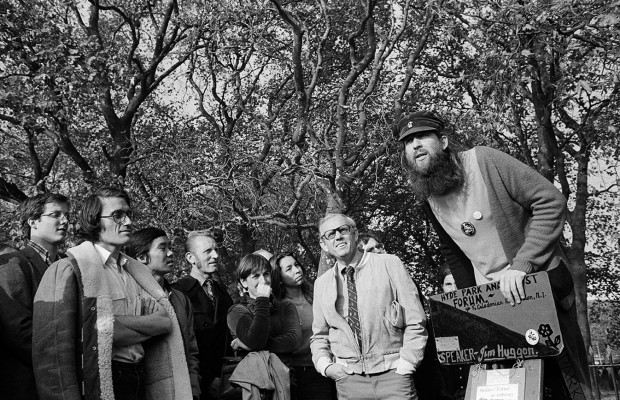 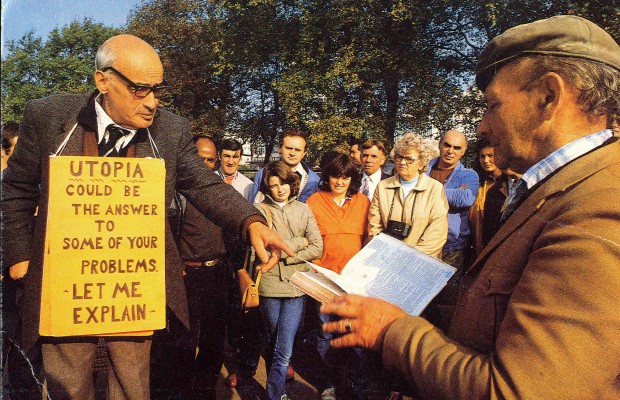 “Utopia could be the answer to some of your problems,” c.1970 © Real Britain Ltd

On the one hand, Speakers’ Corner is a microcosm of Britain’s social and political movements: national independence platforms emerged in the 1940s and 1950s as future African leaders Jomo Kenyatta and Kwame Nkrumah graced the crowds; nuclear disarmament was hotly debated from the 1960s until the 1980s; identity politics took centre stage in the 1980s and 1990s. On the other hand, Speakers’ Corner is its own bubble, full of conspiracy theories, Holocaust denial and light hearted messages entirely unrelated to the headlines like: “advance to yesterday, look backwards to the future.” Post-war Speakers’ Corner is remembered as “an intensely political forum.” The wrath of God featured then, but it has increased in popularity over the last 20 years. Today, Christian and Muslim preachers preside over at least half of the meetings, often in confrontation with one another. Politics, race and nation are still obsessively discussed but through a religious prism.

“I thought it was an interesting period, just that period, to the height of the Cold War, when Stalinism was beginning to crack, and different kinds of left wing ideas were beginning to emerge. They were reflected to some extent at Speakers' Corner. It was a kind of political education, opening up to ideas that I hadn't encountered before, of the Marxist left, Trotskyist, anarchist, the ILP (Independent Labour Party) used to be there, the Socialist Party of Great Britain, Donald Soper, although he was a Methodist, also really had a political platform, he used to get very large crowds, and there were one or two other religious groups. But the most interesting thing to me were the political discussions that the speakers attracted, and after the speakers had left, often you'd get a crowd of 50, 60, 80 people, debating political issues, intense arguments and polemics and I was very much fascinated with that process.”

"Run through the street"

“Too many of my colleagues, I feel, content themselves with speaking within the boundaries of the church and then become, kind of rather predictable and they’re speaking to the converted all the time. And like Donald, I thought that one’s task was as much to communicate what one believed in to as wide an audience as possible, so wherever I’ve been I’ve looked for the wider audience.....It’s an eye opener for some people to realise that the Christian message doesn’t belong to the church in an exclusive way, it’s actually something that’s intended to run through the streets”

“My motivation came as a result of the injustice that I had encountered when I came here. The racism, the prejudice and then remembering my background I came from a sugar estate where when you see white people you take your hat off to say yes sir no sir. All your lives your destiny was controlled by white institutions. And I think that was what- and because of my own personal experience I think that was the motive and that was what was the driving force in me. To change it. To either change it or you accept it I was not prepared to accept it and that was the motivation I think. My background probably has a lot to do with it. I can’t stand injustice, I can’t stand, you know, seeing people being taken advantage of because it’s wrong. Morally, physically, and therefore, yeah, I suppose I’d do it all over again.”

“I was a jailbird”

“I had had a platform in the park called the People’s Retrogressive Party. ‘Advance to yesterday, look backwards to the future and anticipate the past.’ And when people asked for my policy I told them it was to recreate the past by travelling backwards into the future. They never understood that! So that was a fun thing. And then I became serious about the bomb and saw the implications of it, and joined the CND but had my own independent platform. I joined the Committee of 100 and got arrested and was sent to jail. And that was another great learning experience for me. And then I always delight in telling people I was a jailbird and I came out and carried on with my activities. In that time I was quite high focus, my home was raided by the Special Branch, looking for allegedly plans to throw stones at Queen Frederica, which I wasn’t interested in the slightest. But what they did miss, which I had under my trilby hat on a hook was the first divulged plans of the regional seats of government, which nobody knew about, I’ve still got a copy somewhere. And 50 of them came to my home mysteriously, and because they knew I’d use them.”

”Incarnation of the enemy”

“‘Course because the Soviet Union still existed at the time, people would attack me specifically on that one. ‘Why don't you go back to Russia? Why don't you go live in East Germany?’ and so on, which I eventually turned into a starting point of my discussion. So I would do the inverse, and that is, make myself into the stereotype of what people wanted to attack and then tried to undermine that stereotype. But first, by giving the impression of being the incarnation of that enemy. So that was the method I developed for a while at that time. I would say things like, ‘I want the Soviet Union to conquer Britain and their troops to march across England’. And then I would break that down, because then the Russian army would collapse and blah, blah, blah. But the idea not being to attack the Russian army, but to say that the idea that Russia was going to attack England was a stupidity because the Russian army in a physical sense, in a moral sense wasn't capable of establishing the rule over Western Europe that the stereotypical argument of the Western rulers made out. If I didn't say those things, people would have that in their mind. ‘He wants Russia to conquer us.’”

“He was an irate butcher"

“When I was speaking about vegetarian, vegan diet and animal rights I did have a few arguments with a few butchers who happened to be going by and I did get pushed off my milk crate at that stage. I got pushed off by I think he was an irate butcher, I am not absolutely sure. I did later on change topics and then that did change. So for instance, yes I went on a holiday once to Israel. I’d always wanted to go to Israel and I feel in love with Israel. And I am Jewish by background and it got me sort of right back into researching my Jewish roots. So when I came back, I happened to have bought like a scarf but it looked like a Palestinian type scarf. The sort of identifiable sort of pattern they have on their scarves. So I was still speaking about the vegetarian diet but I was wearing this Palestinian scarf and I found that people seemed to be more interested in why I was wearing that Palestinian scarf. After a few months of this I thought I am getting almost more questions about the Palestinian Israel issue than I am about the vegetarian diet. So I thought well I better research, cause if you are standing up on your ladder or something it is good if you can come out with the right answers, so I started researching about the Israel-Palestinian situation so just I could answer the questions. And so then it sort of gradually morphed into me speaking more and more about that and then I pretty much dropped speaking about the vegetarian diet and was just talking about the Israel-Palestine situation.”