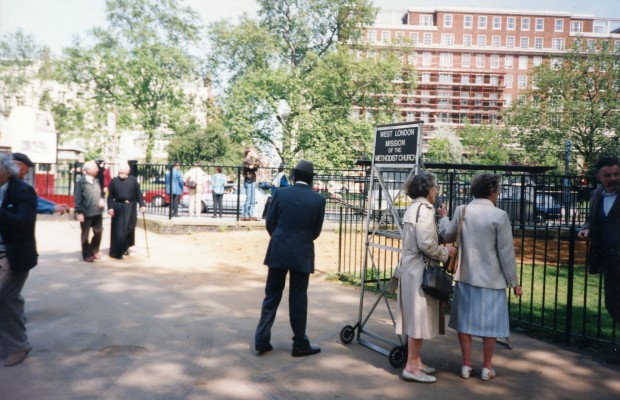 Kathleen Humphreys is a Christian socialist who joined the Labour Party in 1945 with her twin sister. She observes that political young people today are more likely to “go for the fringes” than join mainstream parties. Kathleen taught in Kenya in 1954 at the height of the Mau Mau insurrection, leaving in 1963, the year the country gained its independence. She then became a clerical officer for Woolwich Arsenal. Kathleen joined Kingsway Methodist Hall and started supporting Donald Soper in the open air at Tower Hill and Speakers’ Corner in the 1960s. Kathleen helped to carry Soper’s stand whatever the weather, an essential service when he was old and frail. Impressed by Soper’s mastery of the English language, oratorical skills and politics, she became a fervent pacifist after hearing him speak. She also heckled the Hyde Park Tories. After her retirement, she became a friend and helper to the Soper household and cared for him when he was sick. She is still in touch with his family.

“I had never been a pacifist. I worked in Woolwich Arsenal for ten years and waved the flag and was very patriotic, but listening to old Soper he could be very very convincing and persuasive. My sister and I did become pacifists. You see, we weren’t intellectual people. I suppose we were ripe to be influenced. I don’t know if I’m very easily influenced, I don’t think anybody would ever make me a Tory [laughs], but, you know, we were very ordinary people. But then you see to a certain extent, Soper appealed to ordinary people because the one thing that struck me, I’d forgotten this, on Tower Hill he was the only minister I’d ever heard who spoke ordinary language not, erm, theological or ecclesiastical. He could speak to ordinary working people. There were the dockers, and the businessmen, he spoke an ordinary language.”