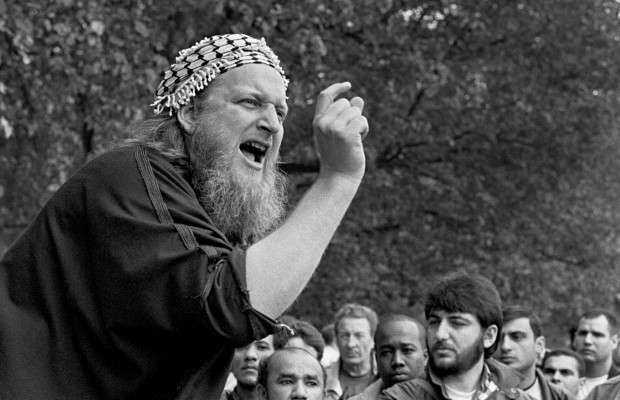 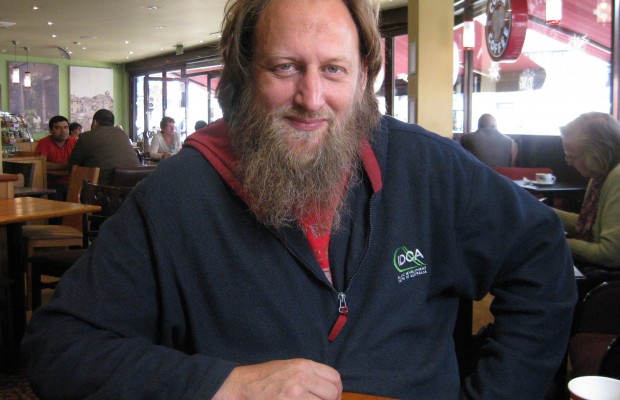 Abdurraheem Green was brought up a Catholic and spent many years as a young adult exploring spirituality and philosophy. He first encountered Speakers’ Corner as a recent convert to Islam in the 1990s, and was irritated by a Christian preacher. He researched critiques of the Bible and heckled Christians for one year. Once he started speaking, he got “pay back” and hecklers “surrounded him like a pack of wolves.” He talks about the etiquette of being a new speaker, mindful of a well-established Muslim speaker Murad ad-Deen already there. He got “a fight or flight” adrenalin rush each time he prepared to speak. Even thinking about it now makes Abdurraheem nervous, though he is a highly accomplished speaker, thanks to Hyde Park’s intense and chaotic “training ground.” Abdurraheem soon felt that anti-Christian arguments were not moving things forward, so he began explaining Islamic philosophy as well as critiquing western foreign policy. He stopped speaking after a decade because it was too draining to continue alongside other work commitments, but he is proud to have been a part of it. To this day he dislikes speaking in darkened auditoriums where he cannot see and connect with his audience so readily.

“A game of chess”

“There’s definitely spots in Speakers’ Corner that are better than others. And choosing the right spot is an important strategy, because it’s sometimes a little bit like a game of chess there as well, alright. Because you have your usual speakers and it’s like sometimes we’d position ourselves against each other. You know, sometimes there’s a sort of truce. But especially with Christians and Muslims, sometimes it is very confrontational. And sometimes the Muslims are specifically attacking a Christian speaker. Sometimes the Christians are specifically picking on and attacking a Muslim speaker. Sometimes you will set up in a certain place and the Christian will stand right beside you, just to disrupt you. His purpose is not- he doesn’t care, you know. He can’t talk. It’s just like, ‘Jesus! Jesus! Jesus!’ But it doesn’t matter, because the purpose is disruption. And that’s upsetting, but that’s part of the game, I suppose you say.”

“I guess it’s the same sort of thing athletes do, they have a little sort of, almost a ritual you go through. And I guess it’s like, you know, there is a place I would park the car. There was a particular route I would take, it’s not in a superstitious way. I’m going to Speakers’ Corner, seeing the chaos, that’s when it’s like, ‘Oh!’ My stomach’s starting to get, you know, like, butterflies, exactly like they call it, they call it, flight or fight response. But forget the fight, it was like, ‘I wanna run’ yeah. And I mean I don’t get nervous speaking now except if I went down to Speakers’ Corner I would still be nervous. I mean, even, I’m saying it I’m feeling scared. Right now, as I’m talking about it, I’m feeling that feeling right now.”